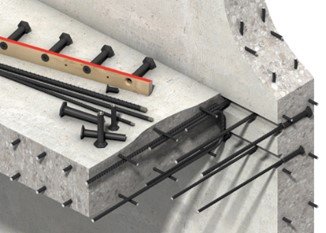 The scope of this procedure outlines methods to be used for constructing effective and durable construction joints in accordance with the contract specifications.

.1    In some cases CLIENT shall have to prepare shop drawings proposing location and type of construction joints and obtain approval from the Consultant’s representative before proceeding with the work.

Laitance on the surface must be removed from the concrete in order to ensure that a good bond will be achieved when fresh concrete will be placed against it. Following methods may be used for removing laitance from the top of walls and columns unless specified otherwise in the contract:

i)    Washing and Brushing:

The easiest way is to brush off the laitance while the concrete is still fresh but has stiffened slightly. Brushing shall be commenced between one to two hours after placing of concrete. Site operatives shall have brushes with soft and hard bristles so that it can be used depending upon stiffness of concrete. Care shall be taken that the brushing shall not be harsh which will dislodge the coarse aggregates. In case laitance has hardened but is still green, a wire brush should be used.

Laitance can be removed by directing a jet of air and water onto it. This method can be used up to six hours after placing or possible longer but the site operative must make his own judgement while adopting this method. This operation must not start too soon because it might dislodge coarse aggregate particles.

If laitance is too hard to be removed by wire brushing, mechanical scabbling can be tried using small percussion power tools. This method can be applied after 3 days when concrete has hardened sufficiently. Care shall be taken not to weaken the coarse aggregates.

Wet or dry abrasive blasting can be used to expose the aggregate but special safety precautions shall be taken while using sand.

.3    The most appropriate time for treating the joints is a matter of judgement, because it depends on the rate of setting and hardening (which is itself dependent on the temperature of the concrete).

.4    Where there is likely to be even a short delay before placing the next concrete pour, protruding reinforcement should be protected. Before the next pour is placed, rust, loose mortar or other contamination should be removed from the bars.

Vertical joints in walls, beams and slabs are usually formed at a stop end in the formwork. Stop ends shall be located where the reinforcement is least dense. Holes for reinforcement in stop-ends are a potential weakness because grout loss can occur. In lightly reinforced sections and where starter bars are acceptable, this problem is frequently avoided by bending bars so that they run along the inner face of the stop-end. When the stop-end is removed, the bars are cut out and straightened. However, the cutting out and straightening can damage the concrete and cause local loss of bond with the bar, especially if this is carried out within 48 hours of placing the concrete.

Proprietary stop-ends have been developed which overcome this problem by encasing the bent bars in expanded plastic foam. The foam can easily be removed and the bars strengthened by means of a steel tube. Take particular care not to use impact to straighten bent steel at stop-ends as this can cause brittle fracture.

Permanent forms of expanded metal are increasingly employed, particularly in deep slabs. The concrete surface produced by such system is very irregular and does not normally require any surface preparation. Where a very high workability mix is being used (slump greater than 200mm) with expanded metal formwork, care should be taken to avoid over – vibration at the joint as this may cause grout loss.

Formwork for subsequent concrete pours must be accurately aligned and well fixed so that there is no grout leak which results into discoloration and honey combing. Strips of foam rubber or polyurethane unless specified otherwise can be fixed around the edge of the hardened prepared joint.

.6    The methods explained previously i.e. washing and brushing, mechanical scabbling and abrasive blasting can also be used in case of vertical joints. However special care shall be taken not to damage the leading edges (leave a margin).

i)    In watertight construction unless specified otherwise, flexible waterbars of specified details can be used. Care shall be taken while concreting so that all waterbars are securely tied to avoid its folding during concreting.

i)    Cold joints normally occur during the concreting operation when a delay in placing adjacent concrete has occurred and earlier concrete placed has stiffened.

i)    Particular care as explained below shall be taken while placing and compacting new concrete on or against the old:

ii)    Any dirt or dust from the surface of the hardened concrete shall be removed preferably with a compressed air hose. As a safety precaution site operatives must wear safety goggles. This cleaning shall be done before new formwork is fixed because not only access be easier than but also dirt might otherwise stick to the new formwork.

iii)    While fixing a new formwork extra dirt is created which can be cleaned after removing a stop end – which will make it easy to be swept or blown away.

i)    Where the structural component containing the joint is to be exposed to the external environment, the joint has to be sealed to prevent ingress of water. For type and method of application refer to the contract specifications and/or manufacturer’s instructions.

Following documentation and forms may be maintained as a minimum pending on Project Quality Plan requirements and contract specification.

i)    Contract and/or approved workshop drawings.

i)    Manufacturer’s test certificates (in case of sealants and

The above referenced documentation where appropriate will be retained in the HEE archive for the prescribed period of time.

Power BI is the next level of data analytics and visualization